Google pulls the plug on Fabric. What now?

About a year ago, Google announced that the company will pull the plug on its app development tool Fabric in mid-2019, making Firebase - Google’s mobile and web development tool - the unrivalled go-to for app developers. And now that the end of Fabric is coming near, we decided to delve deeper into the challenges that come with this transition.

Firebase - a backend as a service - has ever since Google’s takeover developed itself as a complete platform with app-supporting tools. It enables developers to focus on the development of optimal user experiences. They can use Firebase in many ways and for many purposes, from notification service to multiple datastore services. But what are the differences between Firebase and Fabric?

Crashlytics provides users with a much more extensive analysis of the problem. It delves deeper into all lines and threads relevant to the problem. As a developer you can easily scan and solve the problem. Next to that, it provides all the data that you, as a developer, would like to see. Such as precise information about the hardware used and its status. But also whether the problem arises from an operating system (OS) problem.

Halfway through 2018 Google announced that it will pull the plug from Fabric in mid-2019. An important transition for everyone involved in the development of an app, from app developers to product owners. And so for us as well. How do we deal with this transition? 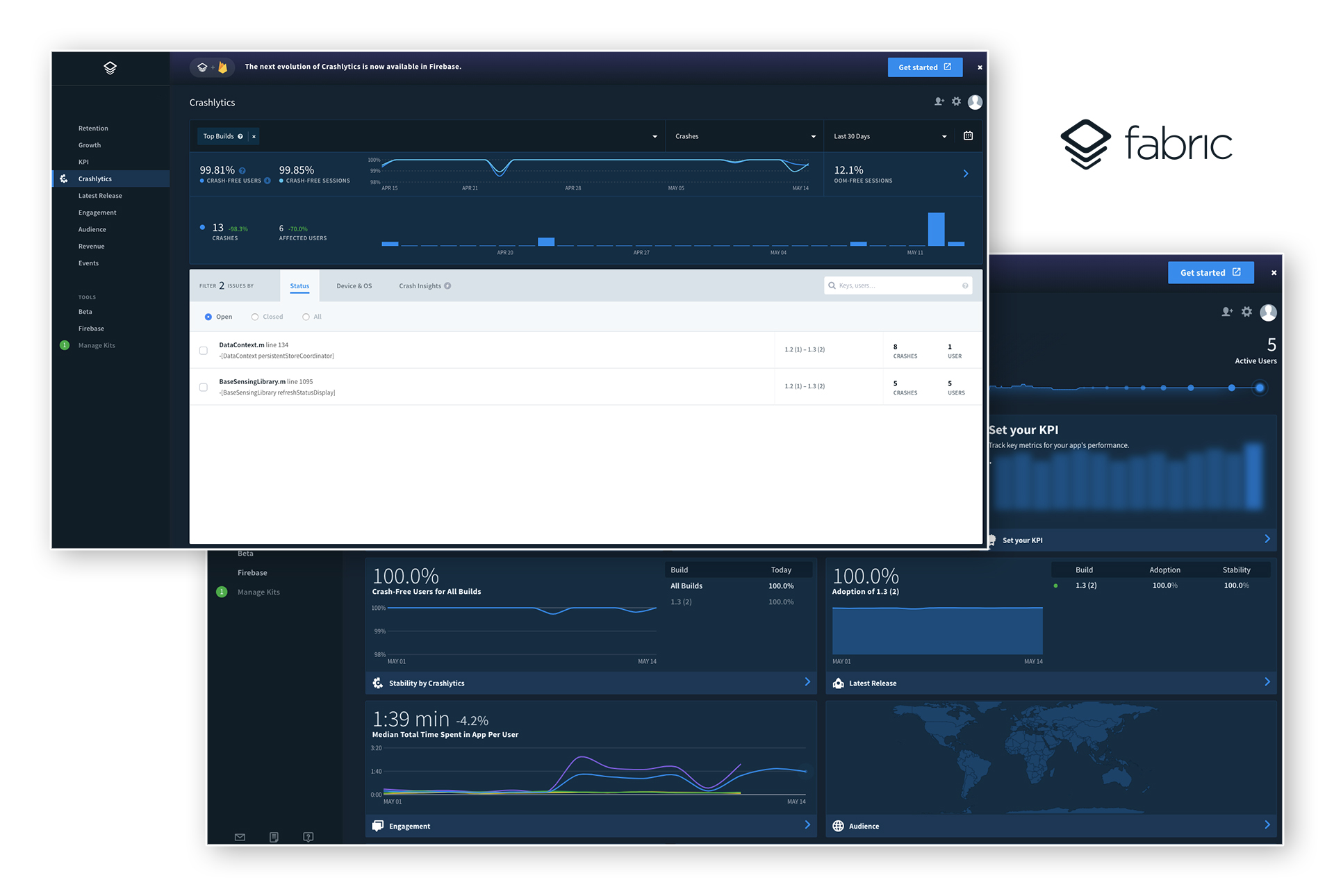 Fabric and Firebase at M2mobi

As part of the quality we want to guarantee, we’re using Fabric mainly because of its comprehensive crash reports (Crashlytics). Crashlytics organizes the various ‘crashes’ in such a way that we can easily see which crashed have the most impact on the use of the app. In this way we can also determine which crashes we should tackle first. An important part of our process in which we strive with our clients for a smooth user experience.

In addition, we use Crashlytics ‘Beta’ for the distribution of beta versions of our apps to testers, both internally and externally (to our clients). Beta offers a user-friendly platform that allows us to easily invite new testers to test our beta versions. It also offers an integration with our build servers, which comes in handy when our developers regard a feature as ‘ready for testing’. The test build is then automatically distributed to our testers. In this way, the process within our development street is accelerated.

At M2mobi we’re always open to experiment at an early stage with new and promising development tools and features. If these are useful and mature enough, we adopt them in our development flow. This is also the case with Firebase. A good example is the ‘Remote configuration’ functionality. This allows us to enable or disable specific features in an app, without the need for an app release. This saves us lots of time and allows us to be more flexible.

For many of our apps we already use the Analytics component and the so-called Cloud Messaging service for sending push notifications to the end user. A good example is the profiling-feature, that enables us to communicate with a specific group of users of the app. By only answering an x number of questions, users could, for instance, unlock new features in the app. In this way we - as app developers or app owners - could learn more about the users and could approach them in a more targeted way. For example: users give answer to the question of whether they are man/woman and what age they are. Next, we are able to target all men aged 20 years, for example. Firebase saves us a lot of development hours here, which is also beneficial for our clients in terms of costs.

However, Firebase has not yet integrated all functionalities from Fabric. And for us, the most important of these is the distribution of beta versions. We’re still using Fabric Beta for the distribution. We do so because this is one of the few systems where we are able to do both the Android and iOS distribution in a user-friendly way. In its most recent update, Google talks about "the next generation of Beta in Firebase, called App Distribution. For us it is a matter of waiting until we find the same user-friendliness of Fabric in this "next generation". 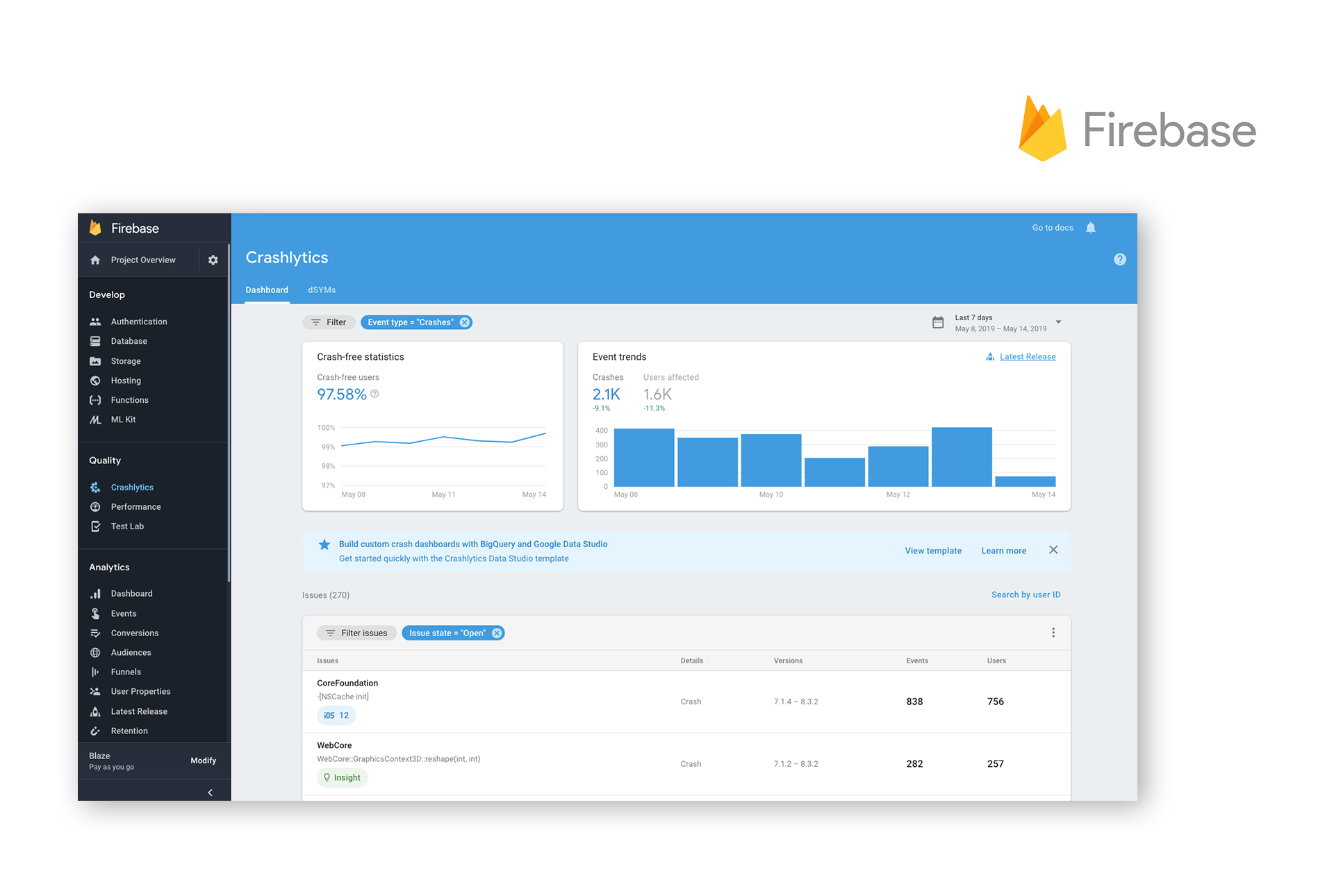 As an app developer, we see many benefits in the transition from Fabric to Firebase, for both us and our clients. It’s way more efficient to work from one system / tool than when various ones - such as Fabric ánd Firebase - are being used next to each other. Efficient in management, but also uncluttered for both developers and customers.

A second advantage is the fact that Firebase uses the Google account management system. This gives us the opportunity to give more responsibilities both internally and externally (towards our customers) and to protect certain things when needed.

At M2mobi we have a positive look on the switch. Our early adoption in combination with a good communication from Google gives us the confidence that we can make the transition to Firebase without any issues.